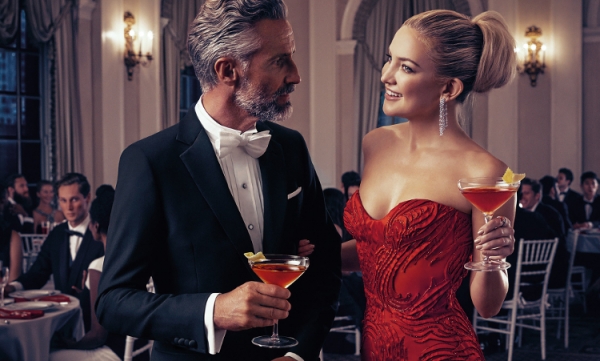 Dedicated to celebrating Campari’s unique, intriguing and versatile bittersweet taste profile, this year’s Calendar capitalises on the buzz and excitement of elections, asking people to take a stand for which aspect of the classic apéritif they identify with more: Bitter vs Sweet, culminating in an ‘election day’ on 1st March 2016.

The thirteen images – each shot by acclaimed international fashion photographer Michelangelo Di Battista – see Kate Hudson embody and personify the two souls of Campari, playing the roles of two candidates on the campaign trail: one promoting the captivating bitterness platform versus the other supporting a more subtle, intriguing sweetness platform.

On starring in the 2016 Campari Calendar, Kate Hudson comments, “This project meant much more than producing a good calendar, it was a creative process telling a great story. This year’s theme asks people to take a stand for what they believe in which is a very powerful message.”

On his involvement in the 2016 Campari Calendar, Michelangelo Di Battista adds, “This project has given me the opportunity to use my unique sense of aesthetic and well-defined style, which reflects the Campari brand seamlessly.”

The public has been called upon to share their opinion and take a stand by interacting with each of the parties involved through Campari’s social channels. Exclusive content will be released throughout the campaign and a dedicated online platform has also been created where consumers will be able to take the BitterSweet test to see which party they truly belong to, and, most importantly, vote and take a stand!

The Campari Calendar, of which only 9,999 copies are printed, will not go on sale but will be internationally distributed to friends of Campari.

More in this category: « Luxury Travel Intelligence (LTI) London Report Out on November 20 Quick, homemade bread with a Robin Hood mix »
back to top