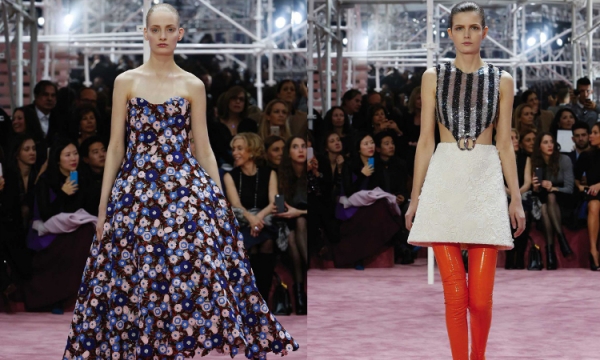 The notes of a song by David Bowie heralded the arrival of the new Dior women as uniquely conceived by Raf Simons. Continuing his exploration of space and time, the House’s creative director now propels us into the creative whirlpool that marked the second half of the 20th century.

To a time when fashion pulsed in tune with the rhythm of technological advances and an increasingly liberated and expressed femininity. “For many years I have always conceived the future through a complete rejection of any backward-looking nostalgia. But the past can be beautiful, too,” he explains. “This collection melds 1950s charm, the 1960s’ experimental side, and the liberation of the 1970s.”

The outfits worn by the models mixed the colors, motifs and influences of these three decades in an almost kaleidoscopic vision. As for the décor, immense metal scaffoldings were reflected to infinity in the mirror-clad walls, acting as a metaphor for a collection that deconstructs and reconstructs eras in order to better build its own modernity. Thus the sequinned evening minidresses are worn under floor-printed plastic coats, patent thigh boots in pop colors are seen beneath the pleats of Corolle skirts, and pared-down A-line outfits are layered with psychedelic knit catsuits. By mixing the references, Raf Simons isn’t just designing a new silhouette, he’s also redefining haute couture by pushing it to its limits, whittling it to its extreme essence. Indeed, on each garment the most delicate decorations sit side by side with the most modern materials and are superimposed one over the other, with an element of technical complexity through which the extraordinary work of the House’s ateliers is revealed. The pleated silk dresses, for example, are embellished with colored ribbons, while guipure is re-embroidered with sequins or leather details. Tradition finds itself employed in experimentation to dress a new kind of flower-woman, free to explore every era and every possibility.

More in this category: « Exclusive Line of Pure Bath Soaps and Body Washes Helena Rubistein Powercell »
back to top