Hennessey Venom F5: The Next Generation 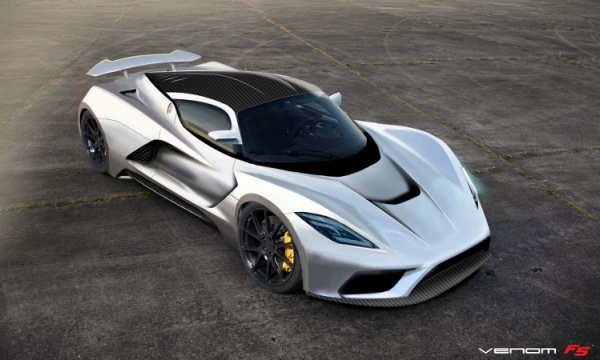 Here at last, the Venom F5, successor to the Venom GT. If you remember from Meteorology 101, the Fujita scale pegs the strongest tornado as an F5, with winds of 261 to 318 mph, so it’s a fitting name for this next-generation Venom that’s the very definition of power and speed.

The F5’s bold, lower-drag shape, additional power and enhanced technology will push this Texas-built hypercar to velocities previously unimagined for a road-legal, series-produced vehicle.
“We are very excited about this next chapter of the Venom, which brings forth an all-new design that is not only a powerful and unique statement that our clients are looking for, but a vehicle that will achieve even higher performance through improved aerodynamics,” said company president and founder John Hennessey. “We learned a great deal during the development of the Venom GT in breaking the 270-mph barrier, and we bring that experience to this new design as we look toward raising the performance bar even higher.”

The laws of physics are immutable, so the step up from the Venom GT’s 270.49-mph world record speed will come from both an increase in power and a reduction in drag from the clean-sheet carbon-fiber body. The drag coefficient drops from 0.44 to below 0.40 while still generating significant downforce through both the upper body shape and underbody venturis, a rear diffuser beneath the rear bumper and a retractable rear wing.

The next-generation twin-turbo powertrain is still under development, but turbo size for the longitudinally mounted V8 is increased, and the fuel system and intercooler capacity are upgraded to handle the demands of increased boost. Hard numbers for power are not yet available, but it’s conceivable that output could exceed 1400 bhp. Pennzoil will continue as a key technology partner, and its Ultra Platinum full synthetic oil—the factory fill for both the Venom and every Hennessey-built vehicle—will ensure the performance and reliability of the F5’s engine under the most extreme conditions.

With extensive use of carbon fiber and aluminum, weight will remain under 1300 kg (2866 lb.), just slightly more than the Venom GT’s 1244-kg curb weight. So it’s highly probable the F5 will eclipse the Venom GT’s current acceleration records too, which stand at 14.51 seconds to 200 mph, and 13.63 seconds to 186 mph (300 km/h).
Several new technologies will be introduced, the most transformative being single clutch paddle-shift transmission (a standard H-pattern manual transmission will still be offered for purists), whose reduction in shift speeds will enable the F5 to accelerate even more quickly. And a GPS-based stability/traction control system will help to channel the F5’s immense power and provide an increased margin of safety, whether on a racetrack or back road. “Of course, the Venom F5 retains the raw, explosive edge that makes the Venom GT such a thrill ride,” said Hennessey partner Don

Goldman, “but these changes will make the F5 easier and more satisfying to drive, day in and day out.”
The Venom F5 will be unveiled in 2015 with deliveries to customers in late 2016. At least 30 Venom F5s will be produced for sale worldwide, at a price higher than that of the Venom GT, which currently sells for $1.2 million. The Venom GT will continue to be offered; at present, 16 cars of the 29-car total production run have been sold.

More in this category: Koenigsegg at the Guangzhou Auto Show »
back to top