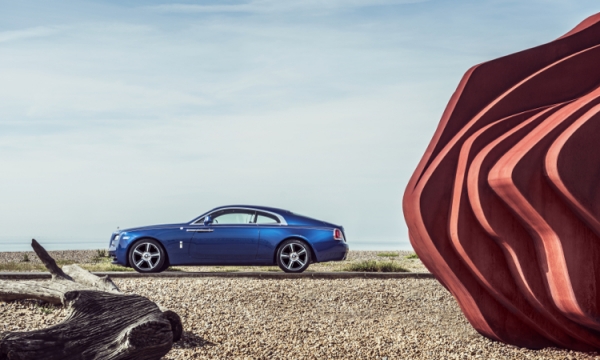 A Bespoke Rolls-Royce Wraith will be the star of the UK’s largest classic motor show, held this weekend at the NEC, Birmingham. The ultimate ‘future classic’, the spectacular Grand Tourer will take centre stage on the Rolls-Royce Enthusiasts’ Club (RREC) stand, supported by a team of experts from the Home of Rolls-Royce at Goodwood in West Sussex.

The Bespoke Rolls-Royce Wraith, hand-built at the company’s Head Office and Manufacturing Plant – the only place in the world where Rolls-Royces are built – is finished in sparkling two tone Midnight Sapphire and Silver. The interior is in Navy Blue and contrasting Arctic leather and Macassar Ebony veneer. The car features a range of Bespoke items, including a Starlight Headliner and an uplit Spirit of Ecstasy, bathed in light. It is also adorned with a suite of highly-advanced technological features including night-vision, parking cameras and Satellite Aided Transmission.

The RREC stand will feature several classic models from the marque. In celebration of the 60th anniversary of the Silver Cloud, an early Silver Cloud I will be displayed alongside a unique Silver Cloud III rolling chassis. Two Silver Shadows will mark the model’s 50th anniversary, one owned by the Spencer family of Althorp and the second recently featured in James May's ‘Cars of the People’. An exact replica of John Lennon's psychedelic Phantom V is also sure to attract attention.

The Rolls-Royce Enthusiasts’ Club (RREC) caters for anyone with an interest in the motor car products of Rolls-Royce. From just 11 people at the inaugural meeting in 1957, membership now stands at around 10,000. Membership is open to owners and non-owners alike and members are drawn from all walks of life and from countries across the world

More in this category: « Opening of "Casa Maserati", the exclusive retail store A few things you should know about hybrids »
back to top