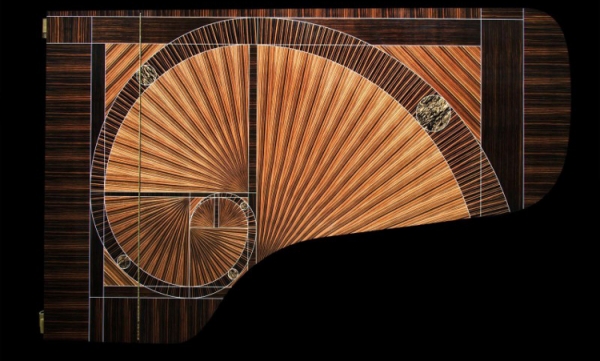 Steinway & Sons, manufacturer of the world’s finest pianos, has unveiled the company’s 600,000th piano, stunningly designed by master artisan, Frank Pollaro. Handcrafted using natural Macassar ebony, the end result is a feat of artistry, engineering and precision that celebrates this milestone for Steinway & Sons and demonstrates the company’s ongoing commitment to uncompromising craftsmanship.

Named “The Fibonacci,” the piano’s veneer features the iconic Fibonacci spiral made entirely from six individual logs of Macassar Ebony, creating a fluid design that represents the geometric harmony found in nature. The lines of The Fibonacci spiral on the top of the piano’s lid are projected down to its unique curved base. Synthetic ivory inlay adds a breath-taking effect to the design, which also features unique patinated bronze details. In the end, over 6,000 hours of work over a four-year period were devoted to the creation of The Fibonacci, from design to finish. The superior craftsmanship of the piano’s exterior is matched only by the unparalleled craftsmanship that is at the very core of all Steinway & Sons pianos.

According to Frank Pollaro, “Designing Steinway & Sons’ 600,000th piano was an honour and a challenge. To me, knowing that this piano would become part of history meant that it had to be more than just a beautiful design, but also needed to visually convey a deeper message.” Pollaro added, “As I considered the number 600,000, the Fibonacci spiral came to mind. The way in which it continues to grow but stay true to its form is very much like Steinway & Sons over these many years. Combining the universal languages of music and mathematics suddenly made perfect sense.”

“Steinway & Sons has a long tradition of world-class craftsmanship, so as we began planning the 600,000th piano, it quickly became apparent that Frank Pollaro was the artist we needed for creative design and perfect execution. His ability to create unforgettable images through
woodwork demonstrates artistry at the highest level, something that spoke to the very core of what this company is all about,” stated Darren Marshall, Chief Marketing Officer of Steinway & Sons. Adding, “The Fibonacci spiral is a representation of perfect proportions and natural beauty. Without a doubt, Frank captured those qualities in this piano, creating a work of art for the eyes and the ears.”

The Fibonacci is destined to become an important piece of cultural history, taking its place of honour amongst previous milestone models that the company has created. The 100,000th was originally given to the United States White House and is now part of the permanent collection at the Smithsonian Institute in Washington D.C., while the 300,000th piano currently resides in the East Room of the White House.

In April, internationally celebrated Steinway artist, Lang Lang, had the honour of being the first artist to perform on The Fibonacci at Steinway & Sons’ new showroom in Beverly Hills. This June, The Fibonacci will travel to the United Kingdom, where it will be showcased at the 2015 Masterpiece London art fair.

The Fibonacci is a Steinway & Sons Model D piano, nine foot concert grand, priced at $2.4 million. In addition to the original 600,000th version, Steinway & Sons will create up to six exclusive, limited edition Model B pianos (6’10.5”) inspired by the same design.