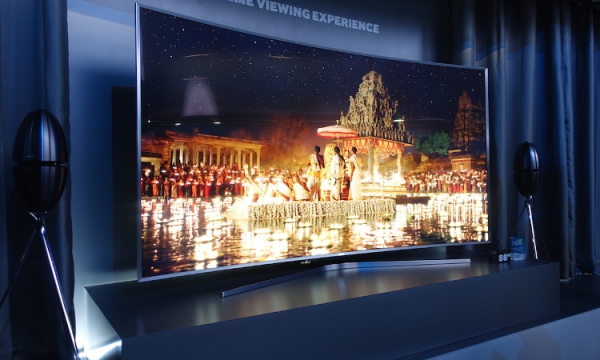 The Luxury Technology Show is an annual series of invitation-only showcases for high-end gear. Basically, it's a way to get media and potential customers in a room with a plethora of tech companies presenting all sorts of the latest and greatest gadgets, A/V electronics, and accessories. And while not everything applies for HDD readers, there are always a few new toys in attendance worth a look.

4K Ultra HD Displays
I've been holding off on upgrading to 4K in hopes of the technology progressing far enough for prices to fall a bit and so as not to get stuck on the wrong side of a technological divide (looking at you HDCP 2.2). The 2015 Luxury Technology Show had five display brands and one projector company on hand for demos, mixing together OLED, LED, 4K and 1080p resolutions. [Please note that these event images should not be used to judge the performance of any of these displays.

Wow. Just wow. It comes as no surprise that the most expensive TV was also the best looking. The curved LG 65EG9600 4K OLED (also available in the flat EF9500 series) is a visual stunner. Plasma-eating black levels give way to brilliant colors and what feels like infinite resolution. The secret behind this, LG claims, is the ability to illuminate (or turn off) individual pixels. In addition to 4K content, we also streamed a few minutes of 'Mozart in the Jungle' in 4K via Amazon Instant Video -- the production's muted color palette might not be the best demo material, but the image was clear and suffered from no banding or compression issues after a prolonged buffering period. However, I will say that sub-4K content did not upscale as well as I'd hoped, but further testing will be needed to get a better sense of this. As I write this article, the 65" 2015 9600 (curved) and 9500 (flat) series 4K OLEDs are currently selling for just under $5,000 on Amazon, while the 55" models (probably too small to benefit from 4K) will set you back just under $3,000.

Sony's Android-powered X900C Series 4K LED is available in a 55" or 65" versions. Let me say that this TV is shockingly thin at the edges, though the power and processing components protrude further in the back. This display does HDR, offers a variety of streaming and other built-in apps, and, if you purchase it right now via Amazon, includes a $100 credit towards the purchase of 4K movies (also via Amazon). In my short time watching this display, it offered strong color and image fidelity. Current Amazon pricing for the 55-incher is just shy of $2,000, while the 65" model is a hair or two under $3,000.

The Panasonic CX850 series 4K LED is available in 65" or 55" sizes. These models will get an HDR firmware upgrade once Ultra-HD Blu-ray launches, but already offer terrific colors and good contrast (it was playing 4K video from Panasonic's YouTube channel so the source material had some compression artifacts). Panasonic said they incorporate circuits from their pro-monitors to help with picture quality and upscaling non-4K content. As a VT series owner, I can't say this television matched the once-king-of-the-black-levels, but it was pretty darn close. Also, the Panasonic iOS and Android app is fantastic, allowing you to mirror your phone, throw content up to the display, and even calibrate your display on the fly without having any menus blocking a portion of the screen. The CX850 series is currently available from Amazon for just over $3,000

More in this category: « Steinway & Sons 600,000th Piano - Fibonacci What do monsters do before a fight? »
back to top