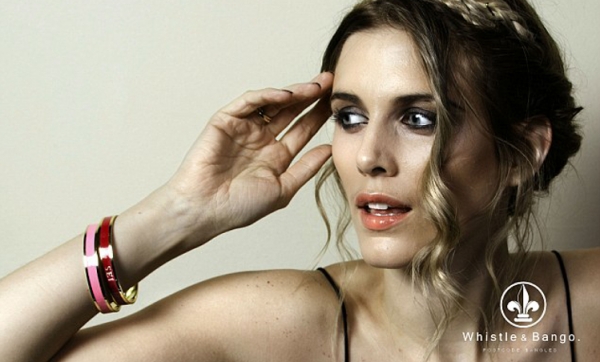 Thursday 23rd October saw the official launch of jewellery brand Whistle and Bango and their signature postcode bracelets at a celebrity studded press launch at Wolf and Badger in Notting Hill. The bracelets were the brainchild of Ania who then invited her two friends Ashley James (model and ex-Made in Chelsea star) and Rosie to join her in the journey to celebrate everything that is fabulous about London.

The brand already has several high profile fans and has been featured widely in the fashion press gracing the pages of COSMO and Hello! as well as the wrists of Judy Murray, Binky Felstead and Donna Air.

Initially I was sceptical about the concept of a postcode bracelet, but on closer inspection I have to say, I am a complete convert. The bracelets are simple and effortlessly elegant, and I must admit, I want one! The initial collection contains some of London’s most popular and prestigious postcodes, however for those of us who don’t live in the big city, the ladies have now introduced a blank bangle which can be personalised with the code of your choice, even better!

The bangles are made from high quality enamel, bossed in silver or gold and are available in a wide range of eye-catching colours. Each bangle has a RRP of £69 (£79 for the personalised variation) with £1 from every sale donated to SHP, a charity dedicated to helping homeless Londoners.

Where did the idea for the bangles originate?
Whistle & Bango began as Ania’s brain child, she then approached Rosie and Ashley with the idea who fell in love with the concept. We wanted a brand name that was memorable and relevant – Whistle & Bango was created as a fun and lighthearted but bold name. A ‘Bango’ is actually a rare breed fish – elegant and independent just like the ladies who wear our bangles. After selecting our first five postcodes and deciding to offer to percentage of every sale to charity, Ania sourced the suppliers, Rosie wrote the copy, and Ashley got our bangles on key celebrities and spread the word in the PR world – Whistle & Bango was created.

What next for the W&B brand?
Well, we wouldn’t want to give away too much detail about our big plans just yet, but let’s just say we think we’ll be sold internationally on land and air, and we won’t just be known for our bangles and our postcodes. There are big things to come for Whistle & Bango, some of the developments you’ll start to see in the next couple of months – the new canvas collection is our most recent development.

More in this category: « Innovative and wearable diamond jewellery collection at VicenzaOro 2015 In Booming India, All That Glitters Is Gold »
back to top