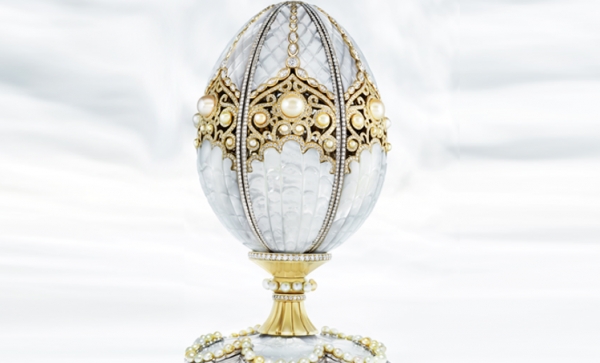 Fabergé, the world’s most iconic artist jeweller, today revives its revered tradition of creating the most precious and coveted of objets d’art. Paying homage to the forthcoming centenary of the last Fabergé Imperial Eggs ever delivered, Fabergé has crafted an extraordinary, one-of-kind egg objet in collaboration with the Al-Fardan family, one of the world’s most renowned collectors of pearls.

The Fabergé Pearl Egg is the first egg created in the ‘Imperial Class’ since 1917 while the Fabergé name and the Fabergé family have been united.

Pearls have been coveted and treasured for millennia, linked inextricably with royalty, style and status. Fabergé is delighted to celebrate these "jewels of the sea" in the exquisite Fabergé Pearl Egg.

The Fabergé Pearl Egg draws inspiration from the formation of a pearl within an oyster, and the egg’s painstakingly-crafted mother-of-pearl exterior opens to reveal a unique grey pearl of 12.17 carats, sourced from the Arabian Gulf and exhibiting exceptional purity and a highly unusual shade of grey.

Harnessing 20 highly skilled workmasters, the objet embodies 139 fine, white pearls with a golden lustre, 3,305 diamonds, carved rock crystal and mother-of-pearl set on white and yellow gold. Each pearl adorning the Fabergé Pearl Egg was hand-selected by Hussain Ibrahim Al-Fardan from his private collection. An ingenious mechanism enables the entire outer shell to rotate on its base, simultaneously opening in six sections to unveil its treasure.

The Pearl Egg is accompanied by a sumptuous Fabergé necklace of white pearls, diamonds and mother of pearl featuring a scallop motif, and finished with an exquisite 19.44 carat white pearl drop.

Fabergé was founded in 1842 and won worldwide acclaim for its artistry in creating objets d’art, jewellery and timepieces. The Fabergé Imperial Easter Eggs, commissioned by the Russian Imperial Family, are almost universally recognised as the greatest masterpieces of the jeweller's art. Peter Carl Fabergé worked with highly skilled workmasters and craftsmen, seeking out precious gemstones with charisma and achieving perfection in every detail from enamelling to gem-setting.

More in this category: « Deeplight Super Falcon Mark II What will the future look like in ten years? »
back to top