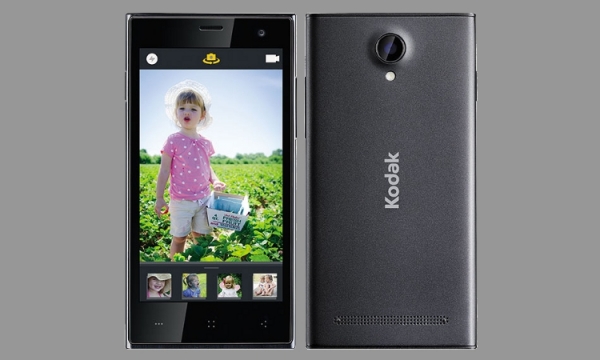 Kodak, one of the pioneering camera companies, teased its first Android-based smartphone last month, and on the occasion of CES 2015 launched it on Tuesday. The dual-SIM smartphone, the Kodak IM5, will be available first in Europe followed by a global launch by the end of Q1 2015 at a price tag of EUR 299 or $249 (roughly Rs. 15,800).

Notably, Kodak has collaborated with British firm Bullit that made most of the components of the smartphone. Bullit is best known for making rugged CAT-branded smartphones.

The handset's highlight is its autofocus 13-megapixel rear camera with flash and a 5-megapixel front-facing camera. The camera features are yet to be detailed, however, the firm had previously said the handset would feature "best-in-class image management software and features."

Kodak's affordable camera-focused smartphone sports some decent specifications as well. It features a 5-inch HD (720x1280 pixel) resolution display and runs on Android 4.4 KitKat OS. The firm has also promised an Android 5.0 Lollipop update in the future. The handset is powered by a 1.7GHz octa-core MediaTek processor (unspecified version) coupled with 1GB of RAM.

The smartphone is equipped with 8GB if inbuilt storage, which can be expanded via a microSD card (up to 32GB). Interestingly, the Kodak IM5 comes with its own app store called "Apps", which is claimed to offer easy access to select applications best-suited for the user. Google Play is accessible from the smartphone, which also features remote management software to guide family members and friends through various functions.

The Kodak IM5 smartphone features a simplified UI with big bold icons. It is best suited for seniors or anyone else who wants the 13-megapixel camera smartphone under a budget price tag. The battery capacity details remain undisclosed for now.

Kodak, while teasing its IM5 smartphone, had earlier said that other "Android-powered mobile devices", including a 4G handset, a tablet and a connected camera, will eventually arrive during the second half of 2015.

"This is a phone for consumers who appreciate the value and heritage of the Kodak brand. It looks great, is easy to use and offers real value for money," said Oliver Schulte, CEO of Bullitt Mobile at the time of the launch.

"Too many memories stay stuck on mobile phones, often because the process for sharing them is too complicated for users; that's why we've partnered on the IM5, the first device in a range of mobile products that takes our heritage and experience in photographic technology and combines it with Bullitt's expertise in designing high-quality devices for a specific target consumer," added Eileen Murphy, VP Brand Licensing at Kodak.

More in this category: Exlusive wearable tech devices »
back to top