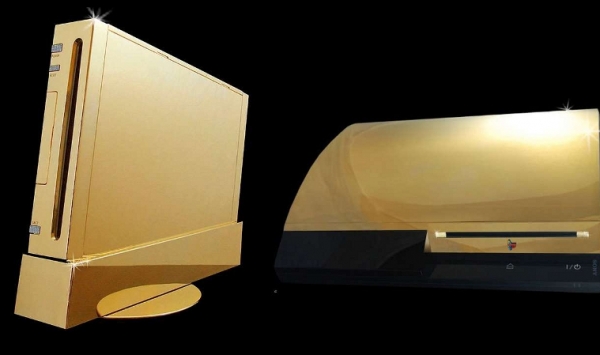 Inventing a new echelon in Engadget's Holiday Gift Guide, Stuart Hughes has managed to Supreme-ize a Nintendo Wii, covering it in over 2,500 grams of solid 22 carat gold and an aggregate total 19.5 carats of flawless diamonds for the three front buttons.

Three have been made and were done so reportedly over the span of six months. Asking price is £299,995, or about $484,818 in US dollars, which if you go by Kotaku's admittedly untrained estimations is about $200,000 in raw materials and the rest in labor / profit. The only to make this sound reasonable is if we compared it alongside a $3.2 million iPhone 3GS, and what do ya know, that was also a Stuart Hughes creation.

We're gonna take a stab in the dark and say that Wii Sports is not included.

Packed with every Wii U console, the revolutionary new Wii U GamePad controller is a second window into your gaming world.

More in this category: « Bang & Olufsen surround sound Luxury food printer in 3D »
back to top